Faust’s Gold: Inside the East German Doping Machine by Steven Ungerleider
Requirements: .AZW/.ePUB reader, 3.4 MB (1.75 MB + 1.68 MB)
Overview: For nearly twenty-five years, East Germany’s corrupt sports organization dominated international athletics. While the German Democratic Republic’s secret "State Plan" was in effect, more than ten thousand unsuspecting young athletes– some as young as twelve years old– were given massive doses of performance-enhancing anabolic steroids. These athletes achieved miraculous success in international competitions, including the Olympics, but for many of them, their physical and emotional health was permanently damaged.
Faust’s Gold draws on the revelations of the ongoing trials of former GDR coaches, doctors, and sports officials who have now confessed to conducting ruthless medical experiments on young and talented athletes selected for Olympic training camps. It also draws on the extensive research of Brigitte Berendonk, who escaped from East Germany to begin a decade-long crusade to bring justice to her fellow athletes, and that of her husband, Professor Werner Franke. Berendonk’s story, and those of her colleagues in the GDR, offers a unique insight into a bizarre regime.
Faust’s Gold is a true-life detective story that plunges into the dark, secretive world of the GDR doping scam, where elite competitors and their families are up against a formidable opponent: the East German secret police, known as the STASI. What emerges is a complex tapestry of the politicized modern Olympics that culminates in a powerful testimony to the massive wrong done by one Eastern Bloc nation to its world-class athletes.
Genre: Non-Fiction > History > Sports and Doping 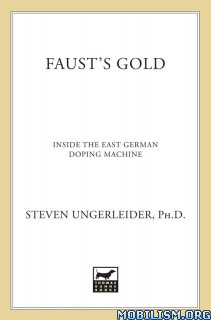