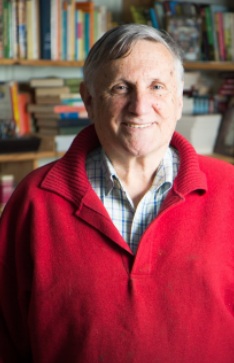 John Marsden (born 27 September 1950) is an Australian writer, teacher and school principal. Marsden has had his books translated into ten languages including Swedish, Norwegian, French, German, Dutch, Danish, Italian, Polish and Spanish.
Marsden was born in Victoria, Australia and spent his early life in Kyneton, Victoria, Devonport, Tasmania and Sydney, New South Wales. At age 28, after working several jobs, Marsden began a teaching course. Whilst working as a teacher, Marsden began writing for children, and had his first book, So Much to Tell You, published in 1987. Since then, he has written or edited over 40 books and has sold over 5 million books throughout the world.
In 2006, Marsden started an alternative school, Candlebark School in the Macedon Ranges, in which he is the school principal. Marsden has since reduced his writing to focus on teaching and running the school. He is also the patron of youth media organisation Express Media.
Marsden was born in Melbourne, Australia but spent the first 10 years of his life living in the country towns of Kyneton, Victoria and Devonport, Tasmania. When he was 10 years old, Marsden moved to Sydney and attended The King’s School, Parramatta. Following his time there, Marsden was accepted into Sydney University to study a double degree in Law and Arts, and attended university despite being confused about what he wanted to do. However, Marsden struggled during his time there, and due to a sense of alienation and loneliness deriving from family rifts, educational experiences, and simply disliking law, he dropped out.
After leaving University, Marsden became depressed, and attributes this depression in part to his inability to find a job that suited him. As his depression deteriorated into suicidal thoughts, Marsden began seeing a psychiatrist. His psychiatrist eventually admitted him to a psychiatric hospital following a diagnosis of depression.
Whilst working at the prestigious Geelong Grammar School, Marsden made the decision to write for teenagers, following his dissatisfaction with his students’ apathy towards reading, or the observation that teenagers simply weren’t reading anymore. Marsden then wrote So Much To Tell You in only three weeks, and the book was published in 1987. The book sold record numbers and won numerous awards including “Book of the Year” as awarded by the Children’s Book Council of Australia.
In the five years following the publication of So Much To Tell You, Marsden published six more books. Notable works from this period are Out of Time which was nominated by the CBCA as a notable book for older readers and Letters From the Inside and a sequal to So Much to Tell You called Take My Word For It which were both shortlisted for the CBCA’s Children’s Book of the Year: Older Readers award. Upon publication in the United States Letters From the Inside received accolades from the Horn Book Magazine and the American Library Association. American novelist Robert Cormier found the novel “unforgettable” and described John Marsden as a “major writer deserving of world-wide acclaim”.
In 1993 Marsden published Tomorrow, When the War Began the first book in the Tomorrow Series and his most acclaimed and bestselling work to date. Marsden went on to write seven books in the Tomorrow Series, together with a follow-up trilogy, The Ellie Chronicles despite originally intending for the entire series to only consist of a trilogy.
At the same time as writing the Tomorrow series, Marsden wrote several other novels such as Checkers, edited works such as This I Believe, wrote children’s picture books such as The Rabbits, poetry such as Prayer for the Twenty-First Century and non-fiction works such as Everything I Know About Writing and Secret Men’s Business.

So Much to Tell You series book 1

John Marsden – So Much To Tell You (read by Kate Hosking)