Off the Deep End: A History of Madness at Sea by Nic Compton
Requirements: .ePUB reader, 6.5 MB | Retail
Overview: Confined in a small space for months on end, subject to ship’s discipline and living on limited food supplies, many sailors of old lost their minds – and no wonder. Many still do.
The result in some instances was bloodthirsty mutinies, such as the whaleboat Sharon whose captain was butchered and fed to the ship’s pigs in a crazed attack in the Pacific. Or mob violence, such as the 147 survivors on the raft of the Medusa, who slaughtered each other in a two-week orgy of violence. So serious was the problem that the Royal Navy’s own physician claimed sailors were seven times more likely to go mad than the rest of the population.
Historic figures such as Christopher Columbus, George Vancouver, Fletcher Christian (leader of the munity of the Bounty) and Robert FitzRoy (founder of the Met Office) have all had their sanity questioned.
More recently, sailors in today’s round-the-world races often experience disturbing hallucinations, including seeing elephants floating in the sea and strangers taking the helm, or suffer complete psychological breakdown, like Donald Crowhurst. Others become hypnotised by the sea and jump to their deaths.
Off the Deep End looks at the sea’s physical character, how it confuses our senses and makes rational thought difficult. It explores the long history of madness at sea and how that is echoed in many of today’s yacht races. It looks at the often-marginal behaviour of sailors living both figuratively and literally outside society’s usual rules. And it also looks at the sea’s power to heal, as well as cause, madness.
Genre: Non-Fiction > Educational 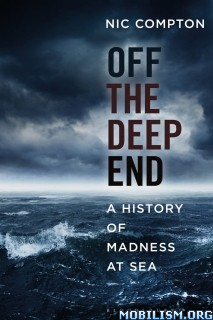