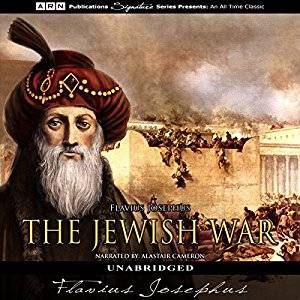 The Jewish rebellion against Rome was a significant turning point in Jewish history. Although Josephus is known for his divided loyalties in the rebellion, his account is the most detailed record available of the Jewish life and revolt under Roman rule. Born in Jerusalem to a father of priestly descent and a mother who claimed royal ancestry, Josephus was a first-century Romano-Jewish scholar, hagiographer, and historian.
Josephus began as a Jewish leader of the rebellion but when captured by the Romans, he switched sides to work as a negotiator in their effort to suppress the resistance. As Josephus was in a position to view the conflict from both sides, his account is extremely insightful. Josephus’s words create a vivid picture from the capture of Jerusalem to the mass suicides at Masada. The Jewish Wars is a historic account useful not only for biblical study but for history lovers as well. Josephus’s recorded histories include the Antiquities of the Jews, along with The Jewish War.